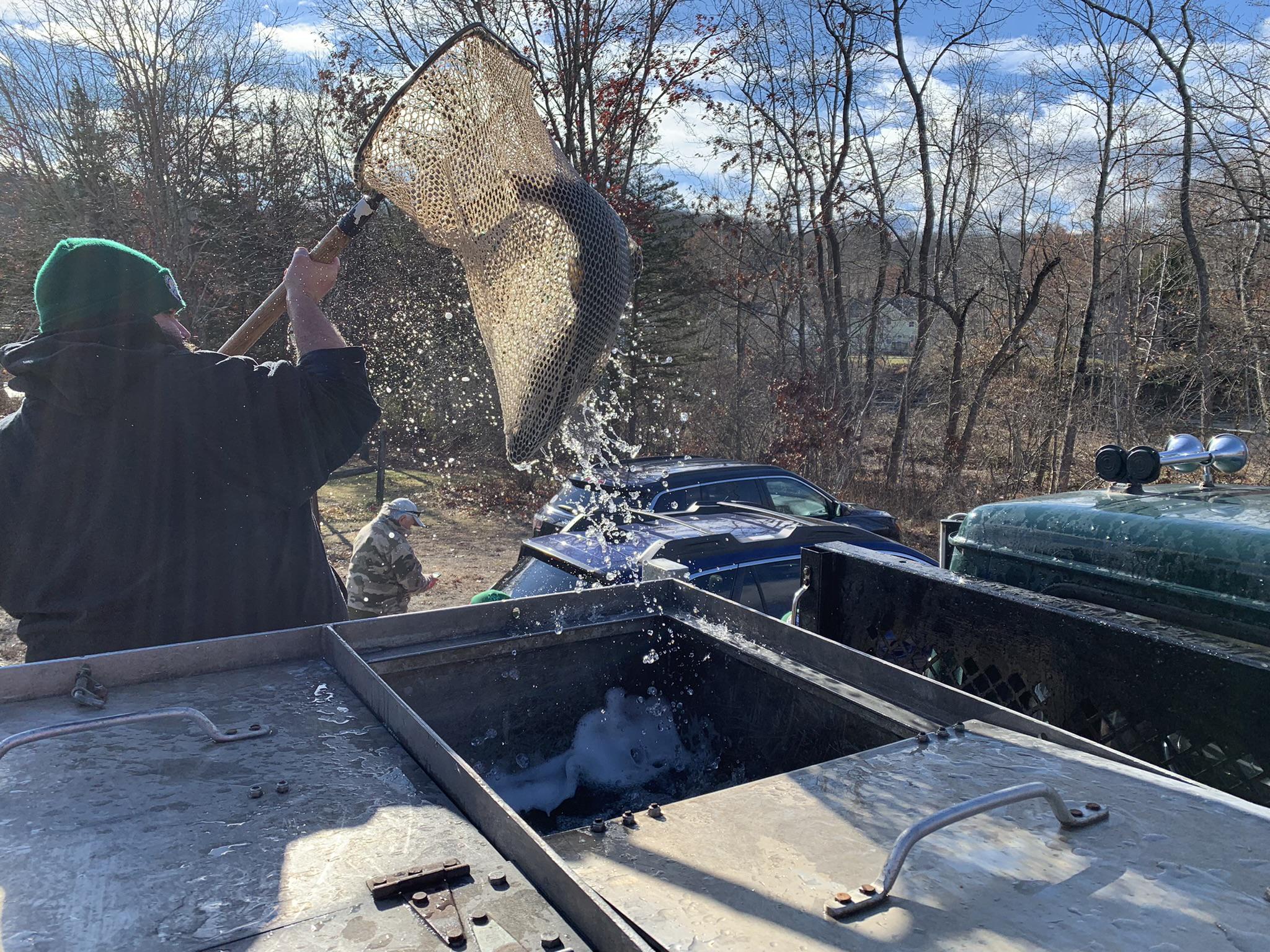 Connecticut’s Department of Energy & Environmental Protection is nearing completion of its 2021 fall stockings of Atlantic salmon. DEEP’s Fisheries Division began stocking Atlantic salmon in early October, and nearly 1,400 salmon have been released so far with close to 150 left to stock, according to a statement.

The upper Naugatuck River (281 salmon), lower Naugatuck River (311 salmon), Shetucket River (602 salmon), Crystal Lake (100 salmon) and Mount Tom Pond (100 salmon) have all been stocked at least once; most river sections have been stocked up to four times already. Most of these fish ranged in weight from 2-6 pounds each, though some larger fish were also stocked. Later this month, DEEP expects to stock close to 150 more salmon. These fish will generally range in weight from 6 to 20 pounds each.

These Atlantic salmon stockings provide an exceptional fishing opportunity for the state’s anglers.

“Atlantic Salmon are renowned for their size, beauty and fighting ability,” said Pete Aarrestad, Director of DEEP’s Fisheries Division. “The Atlantic Salmon recreational fishery has become quite popular, and catching one of these large leapers provides a thrilling experience for anglers.”

All other regulations for fishing for Atlantic salmon on the three rivers and in the lakes that have been stocked with Atlantic salmon remain the same as in the past several years. Complete and up-to-date regulations can be found in the 2021 Connecticut Fishing Guide (also available in Spanish) located online at www.ct.gov/deep/fishingguide and are also provided below). Print versions of the guides are available from many Town Clerks and bait & tackle stores, or by contacting DEEP’s Fisheries Division (860-424-FISH).

Salmon anglers ages 16 and older are also reminded that they may need to purchase a Trout & Salmon Stamp. This stamp is required to fish in an Atlantic Salmon “Broodstock Area,” and for anglers harvesting salmon anywhere else (where allowed). Holders of lifetime fishing licenses issued to persons that are blind, have an intellectual disability, or have certain physical disabilities are exempt from the requirement. The fees for the Trout & Salmon Stamp are $5 for resident anglers who are 18 and older, $3 for CT residents ages 16 or 17 and $5 for nonresident anglers age 16 and older. Information on the stamp can be found in the 2019 CT Fishing Guide and online at www.ct.gov/deep/fishing.

The Trout & Salmon stamp can be obtained the same way licenses are, online at www.ct.gov/deep/fishing or www.ct.gov/deep/getmyfishinglicense, or in person at one of DEEP’s offices, a town hall that has opted to sell licenses, or at a number of other vendors. View a complete list of vendors on the DEEP website or call DEEP Licensing and Revenue (860-424-3105). There is no physical stamp; when a Trout & Salmon stamp is purchased, a line noting that you have obtained a stamp is added to your license document.

Additional fishing and fisheries related information can be found on the DEEP web site at: www.ct.gov/deep/fishing. Fisheries and Wildlife can be found directly on Facebook at www.facebook.com/CTFishandWildlife.