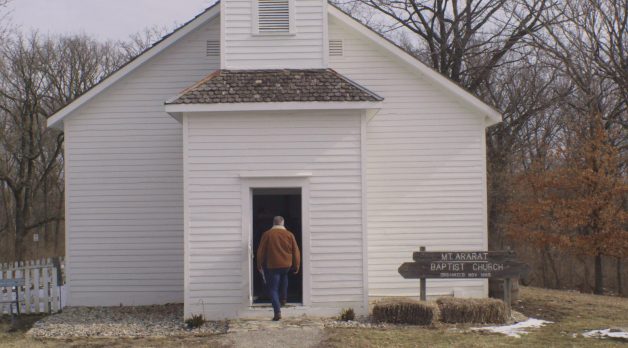 In films like Actress, Kate Plays Christine and Bisbee ’17, filmmaker Robert Greene has explored the interstices between documentary and fiction storytelling, particularly how the latter’s dramatic strategies can shape issues around self-knowledge and historical memory found within the former. In his latest, Procession, which had its premiere at the Telluride Film Festival, this exploration is undertaken with the most direct and wrenching of intents as it involves the work of a group of men using drama therapy and role play to confront memories of their childhood abuse. In reporting from the Camden International Film Festival, Pamela Cohn wrote in our current print issue:

Greene’s new Procession, to my mind, is clearly a triumph of everything he has been attempting as a writer/director since 2010’s Kati With an I. Few filmmakers who work with real subjects will be able to use the phrase “It was a true collaboration between me and my subject(s)” with any gravitas after seeing this film. While Greene clearly is the film’s orchestrator and director, he works with six men, all of whom have (barely) survived sexual assaults as altar boys in their respective Catholic churches, encountering a wall of denial and silence from the institution that employs and protects pedophile priests. The six men in Greene’s film become a scriptwriting and performing troupe, staging their own psychodramas as a way to collectively work through buried trauma. It’s not an easy film to watch, but by giving these men a framework in which to produce their own short fiction pieces—not so much re-enactments as safe conduits for decades-long pent-up rage and pain—the goal is for them to reclaim their lives, to encounter the young boys they once were and attempt to release them from their victimhood. This has been done before by many directors, but not on the scale attempted here. It is a brave, visceral, exceedingly complex piece of filmmaking.

Procession will be released in theaters November 12 and on Netflix November 19,