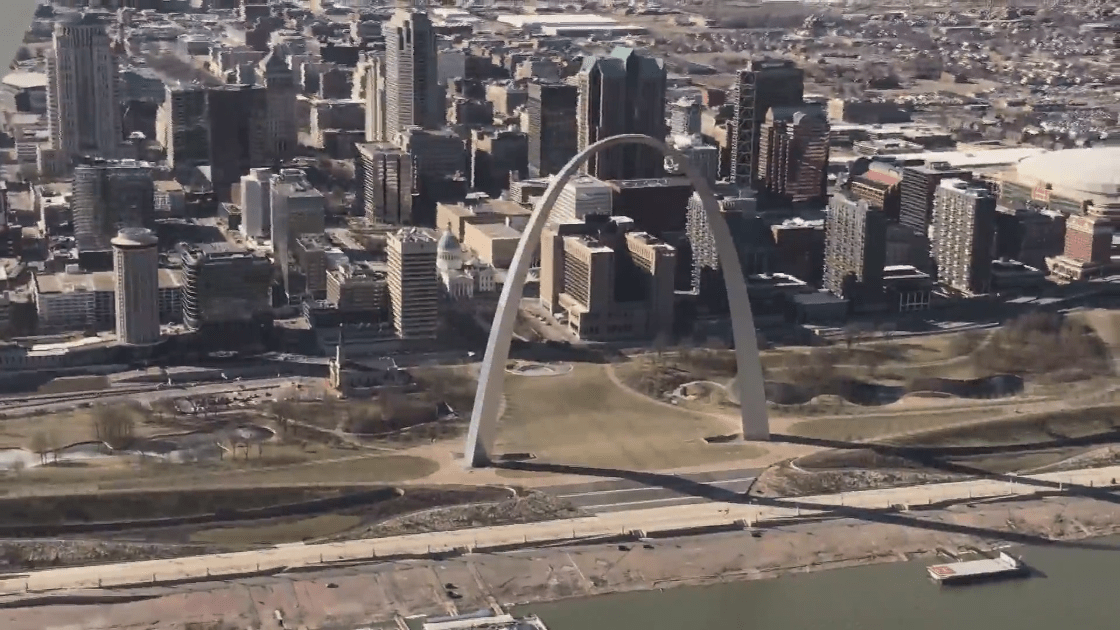 ST. LOUIS – St. Louisans are getting their first-ever look from the cockpit of a surveillance airplane that may soon be used to fight crime in the city.

St. Louis would be the only city in America to use the planes after Baltimore stopped in the fall.

There is hope the skies may be hold the answer to solving St. Louis’s continuing carnage on the ground: the almost daily barrage of bullets and talk of body counts in a proud city that sadly has the worst homicide rates in the nation, year after year.

Dr. Ross McNutt of Dayton, Ohio founded the Community Support Program, which owns and operates surveillance planes. He flew a Cessna 207 with the million-dollar Hawkeye 2 camera nest he developed to St. Louis for an interview with FOX 2 this week.

The 12-lens camera nest looks like the eyes of a fly.

When there’s a crime, police can check footage from the surveillance planes and trace cars and people going to and from the crime scene.

The images are fuzzy with little detail (people appear as large moving dots) but they give investigators maps and a timeline. They also show exactly when a car or person passes by street-level surveillance cameras.

“What we do is we match that up with the ground-based cameras that they pass. So, we know exactly which camera they’re in at what second. We provide that to the officers, saving them lots of time,” Dr. McNutt said.

For example, from plane surveillance footage of a crash scene in Baltimore, police ended up with photos/videos from street-level cameras of two men on a motorcycle involved in the crash. The men had beaten a woman who tried to help them at the scene, then took off on the motorcycle.

The men have since pleaded guilty, Dr. McNutt said.

Dr. McNutt is a retired Air Force Lt. Colonel who created the technology to trace the sources of roadside bombs (IED’s) in the Iraq War.

Now, his Community Support Program has adapted the technology to fight crime.

“When I saw what was going on in our inner cities, it pissed me off that we would allow our cities to be in that way here in the United States; where parents were afraid to send their kids to school; where you couldn’t sit on a stoop and have a beer and talk because you were afraid of getting shot,” he said.

The pilots would fly seven-hour shifts, typically at an altitude between 9,000 to 10,000 feet. Three the planes would cover the entire City of St. Louis.

Donors would cover the up to $8 million cost of bringing it to St. Louis.

The cameras are not able to zoom in and focus. They would be used day and night for investigations ranging from murders, carjackings, arsons, rapes, and car thefts, to missing persons.

Baltimore dropped the program in the fall after a six-month trial period amid political debate and what critics saw as only limited results: an estimated 20% to 31% jump in closures for homicide cases; and a 23% to 38% jump for carjacking cases.

Dr. McNutt claims those results indicate great success considering the limited use of the planes in Baltimore.

St. Louis provides a greater opportunity for a much larger sample size.

There has been support across racial lines in St. Louis but also opposition, primarily over concerns about privacy.

“I would argue 262 murders last year with only 30% of them closed is a larger impact to our quality of life,” said St. Louis Alderman, Tom Oldenburg. “In 2019, we had 194 homicides, 10% closed. This brings a witness forward that’s not a human. This also enhances our already exiting ground cameras.”

St. Louis’s homicide rate was again high for the first two months of 2021.

His bill to give the planes an 18-month test was nearing approval from the full St. Louis Board of Aldermen last month when it got stifled in committee.

He’ll bring it back next session with Dr. McNutt ready and waiting.

“This is a technology that allows you to go back in time and create a story to identify a murder suspect,” Oldenburg said.

“If we can help St. Louis become a better place to work, live, and play, to raise your families that’s what we’re all about,” Dr. McNutt said.

The planes could be flying over St. Louis as early as June.