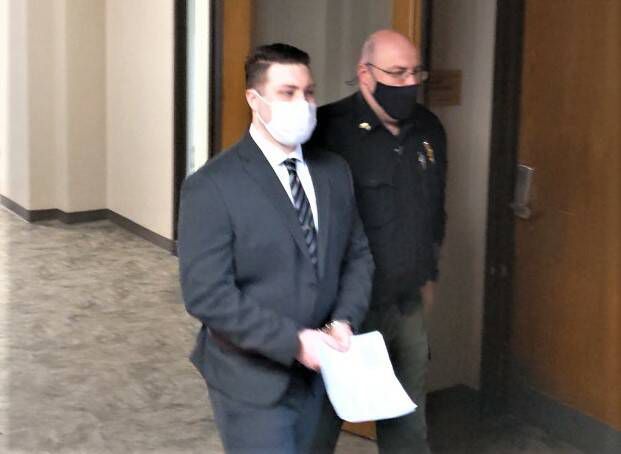 Panattieri, 25, of Crescent Road, Bear Creek, otherwise opted to remain silent on advice of his attorney, Joseph M. Nocito, who plans to appeal the conviction.

As Panattieri kept quiet, the two girls, a father and mother and a grandmother spoke during an emotional hearing before Judge David W. Lupas.

West Pittston police arrested Panattieri twice in 2019 on allegations he repeatedly molested a then 12-year-old girl and a then 16-year-old girl for a period of years. Panattieri is not related to the girls but knew their families.

The youngest victim told Lupas the assaults caused her to have suicidal tendencies and emotional trauma. She said she has trouble being in the same room with men and in school because of male students.

The older victim said she became depressed and has panic attacks when her younger brother has male friends over for sleepovers. She said she attends college in another state in an attempt to escape the trauma.

“We all waited too long for this day to come,” the father said as did his best to keep his composure. “Finally, your day of judgement is here. They considered you a brother.”

The grandmother said one of the victims stayed with her for six months as she was afraid to stay in the same home where she was assaulted.

Directing her comments to Panattieri, the grandmother said, “You took her innocence away from her. We welcomed you into our family.”

Panattieri was convicted on a total of four counts of indecent assault and two counts of corruption of minors following a trial in October. He was acquitted on the most serious offense, aggravated indecent assault.

When the hearing began, Nocito requested Lupas to void the convictions under a state rule for “extraordinary relief.” Nocito cited issues with the jury questions on the verdict slips confused jurors regarding, “a course of conduct.”

Nocito noted since the jury found Panattieri not guilty of aggravated indecent assault, the other offenses required a course of conduct over a period of time.

Nocito then requested a sentence to allow Panattieri to remain at the county correctional facility noting 30 letters from family and friends supporting Panattieri.

Moraski sought a higher end sentence as the two girls will be traumatized for the rest of their lives.

“He was extremely manipulative in forming a relationship with the family,” Moraski said.

Lupas agreed with Moraski, sentencing Panattieri to a total of one-to-two years in state prison followed by four years probation. Panattieri must also register his address, employment and vehicle ownership information as a sex offender for his lifetime under the state’s Sex Offender Registration and Notification Act.

As a first time offender and the grading of the convicted offenses, Panattieri could had been sentenced to 18 months in jail.

Lupas said he went with the higher sentence noting the seriousness of the offenses and the impact the assaults have had on the two girls.