A Cop Told This Guy to Stop. He Retaliated. 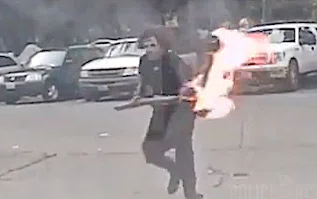 (Newser) – A Seattle police officer was nearly set ablaze Thursday when a man apparently tossed a flaming piece of wood in his SUV, CNN reports. The officer was seeking a man said to be brandishing a flaming object when the encounter occurred in an alleyway. Police dashcam and bodycam videos show the officer telling the suspect to stop, but the man responds by sprinting to the police vehicle, which is suddenly on fire as Officer Caleb Pomazon fires shots through the windshield. “He lunged in, he ran, and the driver’s seat was already in flames,” a witness tells KIRO. “I thought the officer was still in the car, the driver’s seat was on fire and then within minutes the car was engulfed in flames.”

KOMO News reports that the suspect, 37-year-old Brian Leil, was later arrested by officers in a parking garage. He’s behind bars on $500,000 bond and likely faces first-degree assault charges, officials say. Seems the suspect was the same guy who had just been rampaging through a homeless camp in Denny Park, shouting racial insults: “I guess he was the one hitting people with hammers,” says one of the campers. “He hit a black guy.” As for the vehicle, it erupted in flames and appeared to be gutted. Luckily the officer got out the right-side door and escaped in time. “It was an incredibly dangerous situation for our officer,” says Assistant Chief Deanna Nollette. “He did suffer some minor injuries, some minor burn wounds.” (Read more police stories.)