Surfing online without leaving any traces: It’s possible on the darknet, where websites can be visited anonymously, in encrypted form — and that of course attracts criminals.

Every now and then, authorities manage to bust cybercrime structures. On Tuesday, the public prosecutor’s office in Koblenz in southwest Germany announced that they had shut down DarkMarket, which was “probably the largest illegal marketplace on the darknet.” Its operator was arrested and around 20 servers in Ukraine and Moldova were confiscated.

Almost everything could be traded on DarkMarket: 56 grams of pure heroin could be ordered for €900 ($1,000), a semi-automatic machine gun for €300. A list of FBI agents’ social security numbers was available for €300, while Facebook passwords from 100,000 users were on sale at a bargain price of €30.

Such criminal transactions shape the image of the darknet in the public eye. Hardly no one associates the network with topics such as peace movements, whistleblowing or freedom of expression, even though they are also closely linked to the darknet’s existence.

For instance, WikiLeaks, the platform through which secret documents of the US government have been released since 2006, would not be possible without the darknet. Through the anonymization network Tor — the name of the browser that leads to the darknet — files can be easily encrypted and uploaded anonymously. 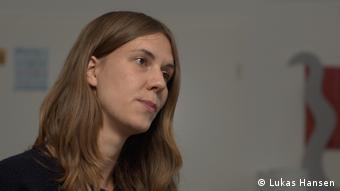 Lisa Dittmer looks into the positive aspects of the darknet

“The Tor browser also enables people to surf the internet anonymously and access censored websites,” explains Lisa Dittmer of Reporters Without Borders. Through her work as the organization’s advocacy officer for internet freedom, she knows that there are some countries where free expression of opinion would not be possible without the darknet.

Darknet bypasses censorship on the internet

“China is probably the best-known example,” said Dittmer. “North Korea too, of course. In those countries, social networks such as Facebook are blocked. And there are more and more countries that are expanding surveillance and censorship of the internet, for example Iran and Russia.”

The darknet also plays an important role in current protest movements, for example in the Belarusian demonstrations against President Alexander Lukashenko, explained Dittmer: “The use of social media is largely prohibited in the country. And journalists’ accreditations are being taken away. So it has become essential to find alternative communication tools that can bypass government censorship there.”

Majority of Tor users are not criminals

That’s exactly what inspired the creation of the Tor Project, which opened the doors to the darknet in 2002 with its Tor Browser. “Our mission is to allow people to protect themselves from surveillance and circumvent censorship,” explained Tor Project internet activist Julius Mittenzwei: “Wherever you are on the internet, you’re followed. Tor wants to change that.”

Mittenzwei is annoyed that most reporting on the darknet and Tor focuses on illegal sites. “There are probably very few people who realize that the majority of the roughly two million daily Tor users use the browser for completely legal activities,” he explained.

Reporters Without Borders’ Lisa Dittmer also wants the darknet’s reputation to change. Of course it is necessary to report on criminal sites such as DarkMarket, but that should not be the media’s only focus, she says: “For me, criticism of the anonymization in the darknet is also an attack on freedom of the press and freedom of expression in many areas of the world.”

This article was translated from German by Elizabeth Grenier.